As the participating agencies of the International Space Exploration Coordination Group (ISECG) are advancing the international coordination of exploration planning, they have acknowledged the important role of scientific discoveries for future exploration activities. They have therefore engaged in a coordinated interaction with the global multidisciplinary science communities to help firmly establish a strong presence for science in planning the future human and robotic exploration of the solar system. The initial engagement resulted in the development of an international Science White Paper on the “Scientific Opportunities Enabled by Human Exploration beyond Low Earth Orbit”, that informed the update of the Global Exploration Roadmap.

ISECG participating agencies will continue to seek interaction with and consultation from the scientific communities as the international development and implementation of space exploration evolves. 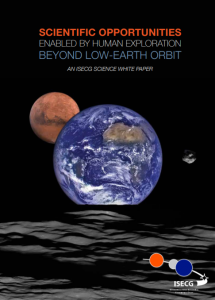 The document takes account of the important role that science plays in the international approach for human and robotic space exploration to achieve broad social, intellectual and economic benefits. In particular, opportunities for scientific investigations at different destinations are depicted. The Science White Paper focuses on the science enabled by near-term mission concepts for human exploration: a gateway in the lunar vicinity, the lunar surface, and asteroids. Additionally, an initial overview of Mars as the horizon goal and its scientific opportunities is included.

The scientific opportunities presented in the Science White Paper reflect the collective views of a science community from a variety of nations and science disciplines. An international Science Advisory Group was chartered by ISECG to lead this effort. The Science Advisory Group as well as the ISECG participating agencies engaged the global scientific community through open exchanges at various events and conferences.  This engagement included coordination with the Committee on Space Research (COSPAR) Panel for Exploration, NASA’s Solar System Exploration Research Virtual Institute (SSERVI), the European Science Foundation and others.

The Science White Paper captures opportunities for scientific discovery associated with exploration missions in two themes: “Understanding Our Place in the Universe” and “Living and Working in Space”. These themes provide the basis for the description of opportunities across all space exploration activities as described in the ISECG Global Exploration Roadmap.

Elements of the Science White Paper contents have been incorporated into the ISECG Global Exploration Roadmap to highlight the scientific opportunities of the conceptual missions and architecture.

Development of the scientific content of the Science White Paper has been coordinated through a Science Advisory Group (SAG) led by Dr. Ben Bussey of NASA Headquarters and Dr. Jean-Claude Worms of the European Science Foundation. Its members are listed below.

FOLLOW-ON EVENTS/ACTIVITIES ON SCIENCE AND EXPLORATION

ESA Call for Ideas: Research Opportunities on the Gateway

In August 2017 ESA opened a Call for Ideas inviting members of the science community in Europe to propose research ideas that could be performed on the Gateway, a crewed spaceship in lunar vicinity. This document (pdf, 19.3MB) contains the ideas received in response to that call and accepted following review by a Science Advisory Team representing the various science working groups that support ESA’s activities. Ideas are broadly categorised for the purposes of this document as: life sciences, physical sciences and astronomy, Solar System and Earth sciences, and technology.

The more than 100 inputs received on the scientific and other research which could be performed on this platform were discussed and consolidated at a workshop at ESA ESTEC, in the Netherlands, on 5th and 6th December, which was attended by more than 200 people. The end product of this consultation is a compendium of ideas for utilisation and a collection of findings and recommendations, contained within this document, which highlight the major research opportunities and the technical aspects upon which realisation of these opportunities depends.

NASA is looking at how the Gateway can create value for both robotic and human exploration in deep space. In late 2017, the agency asked the global science community to submit ideas leveraging the gateway in lunar orbit to advance scientific discoveries in a wide range of fields. NASA received more than 190 abstracts covering topics human health and performance, Earth observation, astrophysics, heliophysics, and lunar and planetary sciences, as well as infrastructure suggestions to support breakthrough science. These ideas were then discussed in a science workshop from February 27 to March 1 that gathered about 300 attendees from the broad US and international community. Although it is too early to select specific research for the gateway, the workshop marks the first time in more than a decade the agency’s human spaceflight program brought scientists from a variety of disciplines together to discuss future exploration.